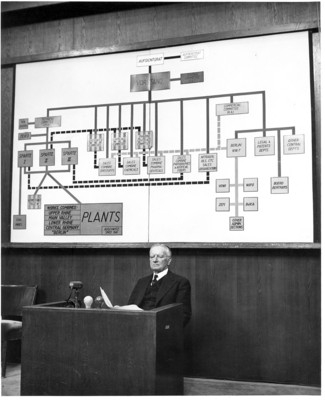 British Brigadier (retired) John H. Morgan, the Prosecution's second witness in the I. G. Farben War Crimes Trial now in process in Nurnberg, is shown on the stand in Court Room No. I, in the Palace of Justice. General Morgan, King's Counsel and barrister at law in the Middle Temple in London, told of his experiences as British member of the Allied Control Counsel for Germany after World War I. Behind him is one of the organizational charts of the Farbin Industrie introduced by the prosecution. Photo 11 September 47