Farben officials in the dock 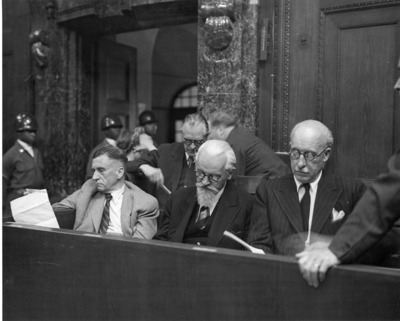 In the dock of a U.S. war crimes courtroom at Nurnberg, three defendants of the I.G. Farben [company] rehearse and make final corrections in their pleas of innocence before addressing the U.S. Military Tribunal. Indicted with 23 co-officials of the giant chemical combine, the prosecution has asked that the defendants be found guilty of making Hitler's wars of conquest possible. The defendant's final statements were made following the closing arguments of the U.S. prosecution and the defense at which time the Tribunal recessed to prepare its verdict. Left to right the defendants are: Carl Krauch - Chairman of the Supervisory Board of Directors; Herman Schmitz - Chairman of the Managing Board of Directors; and Georg von Schnitzler - member of the Central Committee of Farben's Managing Board of Directors.