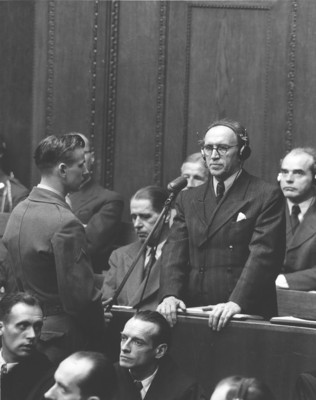 CHRISTIAN SCHNEIDER, former Chief of the Central Personnel Department which directed the treatment of labor at plants of the I. G. Farben Industry during the war, is shown in the dock of a Nurnberg court room August 14, 1947. He and 20 other former Farben officials pleaded "not guilty" to charged of planning and waging wars of aggression, plunder, and spoliation of countries occupied by Germany during the war, exploitation and mistreatment of slave labor in Farben factories, and war crimes.