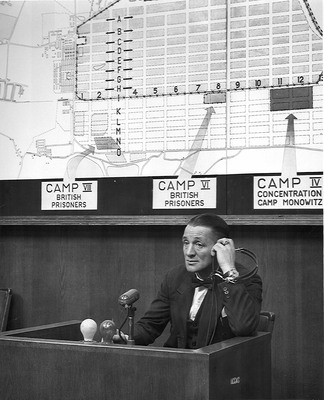 CHARLES J. COWARD, of London (Lower Edmonton), a prosecution witness in the Farben Case, was captured by the Germans at Calais while serving as a Battery Sergrant with the Royal Artillery. As a P W he worked in the Auschwitz plant of I.G. Farben and testified on the horrors of the German concentration camp before U.S. Military Tribunal VI. Coward stated that their working and living conditions, although far from good, were not too bad in comparison to those of D.P. and foreign national slave laborers who were continually threatened with extermination by gassing and other means.