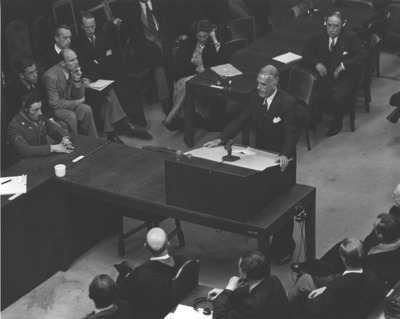 The U.S. Military Tribunal at Nurnberg presiding over the trial of 23 former I.G. Farben officials on war crimes charges, heard the final statement from the defendant Erich von der Heyde when he said, "I have come to the conclusion that I am not guilty". Von der Heyde countered the U.S. prosecutions' allegations that he and his co-defendants helped build Hitler's war machine saying that Farben was never in the Nazi's inner circle, for industrialists were never trusted due to their international ties. Following the defendants' final pleas the Tribunal adjourned to prepare its judgement. Photograph 11 June 1948