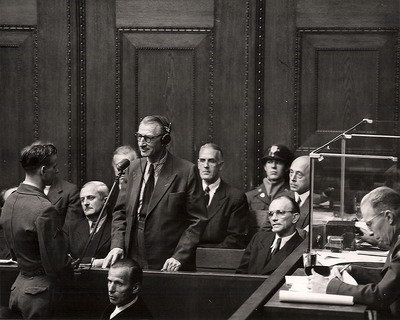 ERNST BUERGIN, former I. G. Farben industry official is shown during the arraignment in Nurnberg August 14, 1947, of 21 former officials of Farben on charges of planning and waging wars of aggression, plunder and spoilation of German occupied territory, exploitation of the slave labor of foreign nationals and prisoners of war, murder and torture of these workers, and other war crimes and crimes against humanity. All the defendants pleaded "not guilty" to all charges.