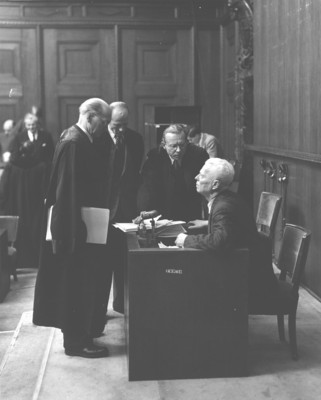 Surrounded by his lawyers, August von Knieriem, I. G. Farben director on trial as a war criminal at Nurnberg, outlines during a court intermission the testimony he will offer in his own behalf. Knieriem, Chief of the Legal Division of Farben, and 23 other top Farben officials are charged with aiding Hitler in his aggressive wars in return for the concessions of foreign factories and the use of cheap foreign slave labor from concentration camps. Photo 5 February 1948